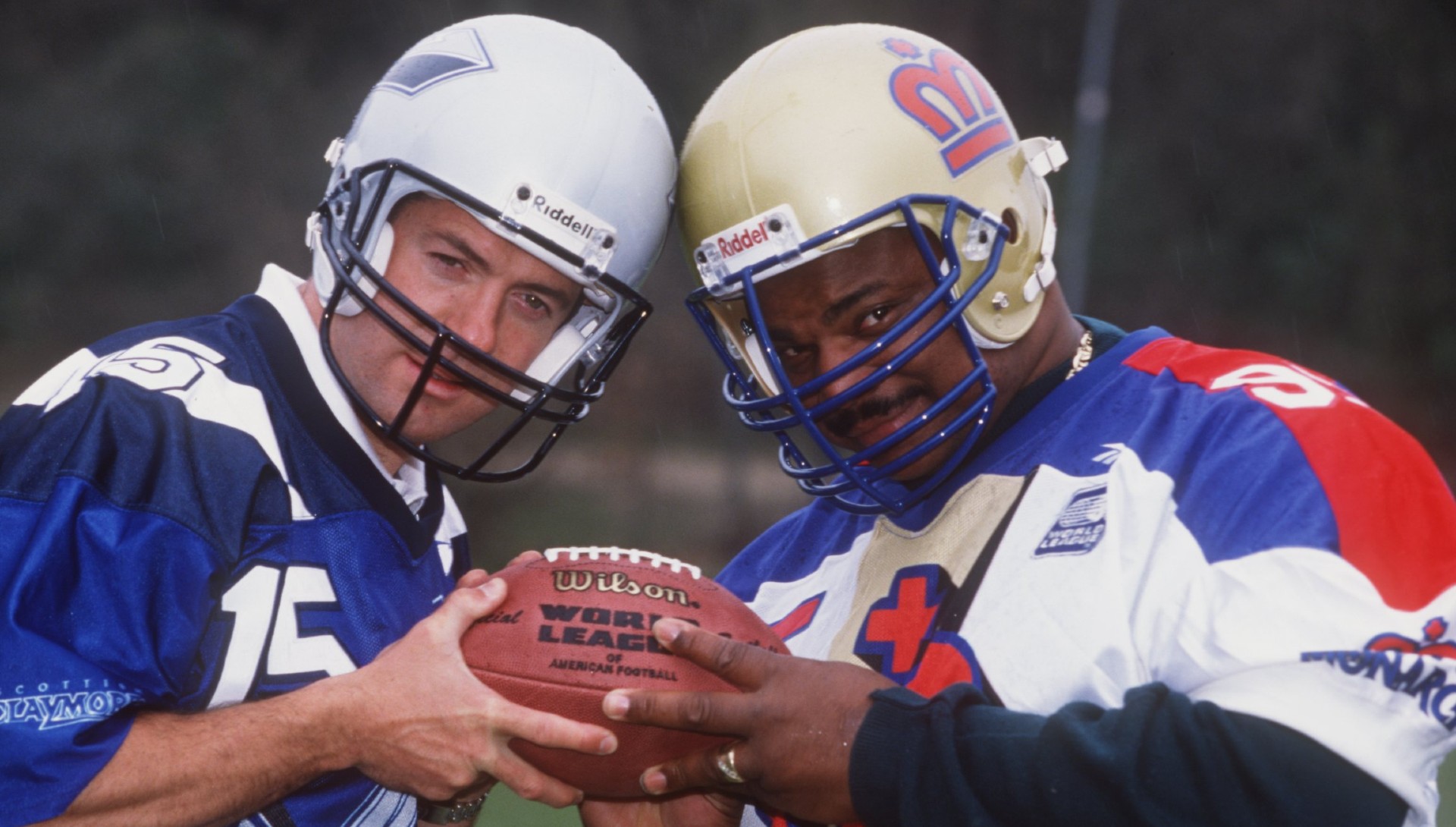 The first WLAF games were played on March 23, 1991, nearly 10 years before the first version of the XFL burst on the scene in 2001. The WLAF started with 10 teams, three of which represented big European cities — the London Monarchs, the Barcelona Dragons and the Frankfurt Galaxy.

The other non-American team in ’91 was the Montreal Machine, joined stateside by the Raleigh-Durham Skyhawks, the Sacramento Surge, the Birmingham Fire, the New York/New Jersey Knights, the San Antonio Riders and the Orlando Thunder.

With the exception of the Knights, none of the markets fielded an NFL team, making the WLAF immediately and extremely popular with its new fan bases. The Monarchs defeated the Galaxy, 24-11 as part of an inaugural Saturday tripleheader.

The WLAF carried its high league-wide attendance from that opening weekend into the World Bowl championship to culminate the ’91 season. In the game, the dominant 11-1 Monarchs defeated the Dragons 21-0 in front of a crowd of 61,108 in London’s Wembley Stadium on June 9.

The Monarchs were loaded with 15 players who made the WLAF’s inaugural first and second All-World teams. The most notable name was center Doug Marrone, now head coach of the Jacksonville Jaguars, who are scheduled to play two NFL games in London in Wembley Stadium in 2020.

Although that buzz leading up to the first World Bowl confirmed a full second season for the WLAF — with the same teams save for Columbus-based Ohio Glory replacing the Skyhawks — the NFL owners soon after realized they had potentially created a monster. They could no longer financially support the WLAF as much because they perceived it as a rival to the NFL instead of a complementary offseason alternative.

When the WLAF returned in 1995 after a two-year suspension of operations, it was made possible by the remaining NFL monetary support and a television deal with Fox Sports, which also invested in the league as a co-owner. The WLAF came back fully based in Europe, only on a much smaller scale in terms of relevance and attendance. The biggest indication of that was the Monarchs switching from Wembley to White Hart Lane in Tottenham.

The Monarchs, Dragons and Galaxy remained, joined by Germany-based Dusseldorf-based Rhein Fire and reboot expansions into the Netherlands with the Amsterdam Admirals and the Edinburgh-based Scottish Claymores.

In that ’95 season, Patriots and Colts legend Adam Vinatieri kicked for the Admirals. Future Vikings and Buccaneers quarterback Brad Johnson spent that year with the Monarchs. Both men went on to earn key roles in Super Bowl-winning teams in the 2000s.

No American team would be in the league again. Over the years, until 2007, three more European teams would be born, all in Germany — the Berlin Thunder, the Cologne Centurions and Hamburg Sea Devils. Only the Frankfurt Galaxy remained in existence for the league’s whole duration, from 1991 to 2007.

In 1996, the WLAF, after creating a busy pipeline to the NFL, had to resort to more gimmicks to create continental attention. That included bringing in big-name athletes from other leagues, the biggest of which was former Bears Super Bowl superstar defensive lineman William “Refrigerator” Perry. The Monarchs signed Perry, then 33, in the twilight of his career comeback attempt. The Claymores likewise brought in Scottish rugby star Gavin Hastings — 34 at the time — to be their kicker for one World Bowl-winning season.

The forced hype didn’t work. In what became the WLAF’s final season in 1997, attendance was dwindling well below expectations. Then came the rebranding to “NFL Europe” in 1998. Under president Oliver Luck — previously the Galaxy’s general manager — the league found its new successful niche. Instead of catering to American football fans, it was tailored more to the NFL-hungry population of England and Germany as a minor-league feeling supplement to the European soccer schedule.

The more reasonable and manageable form gave rise to some future stars. NFL MVP, Super Bowl winner and Pro Football Hall of Famer Kurt Warner was quarterback for the Admirals for one season in 1998 in between his prolific stint with the Arena Football League’s Iowa Barnstormers and surprise rise with the Rams in 1999.

The most popular alumnus of the WLAF days, however, is arguably comedic actor Terry Crews, co-star of NBC’s” Brooklyn Nine-Nine.” Crews, between short stints with four NFL teams, was an original member of the Rhein Fire in 1995.

At the end, the WLAF went from NFL Europe to two years of “NFL Europa” before folding as a league, losing a lot of business in 2007. Through it all, the league by any name was groundbreaking in terms of incorporating experimental rules and flashy, non-traditional jerseys. At its height, the league developed a lot of future and current NFL players into more effective pros.

When the WLAF debuted on USA and ABC, it featured broadcast innovations such as head cameras. By the end of the league’s run on the then-fledgling NFL Network, it was simply seen as an ersatz extension of the NFL.

Given the NFL’s global initiative is more aggressive than ever, it’s hard to believe it wasn’t that long ago when Europe was a temperamental beta project. Without the World League of American Football, there’s zero chance the game would be as popular as it is today so far away from the 32 NFL cities.

The only big step left — placing a permanent expansion NFL team abroad to usher in the era of the “International Football League.” When that happens, remember: The WLAF is what made it all possible.

Roger Federer: ‘It Was Crazy, Fun And I Couldn’t Be More...

admin - January 24, 2020
0
With 20 previous appearances at the Australian Open, Roger Federer is no stranger to classic matches...